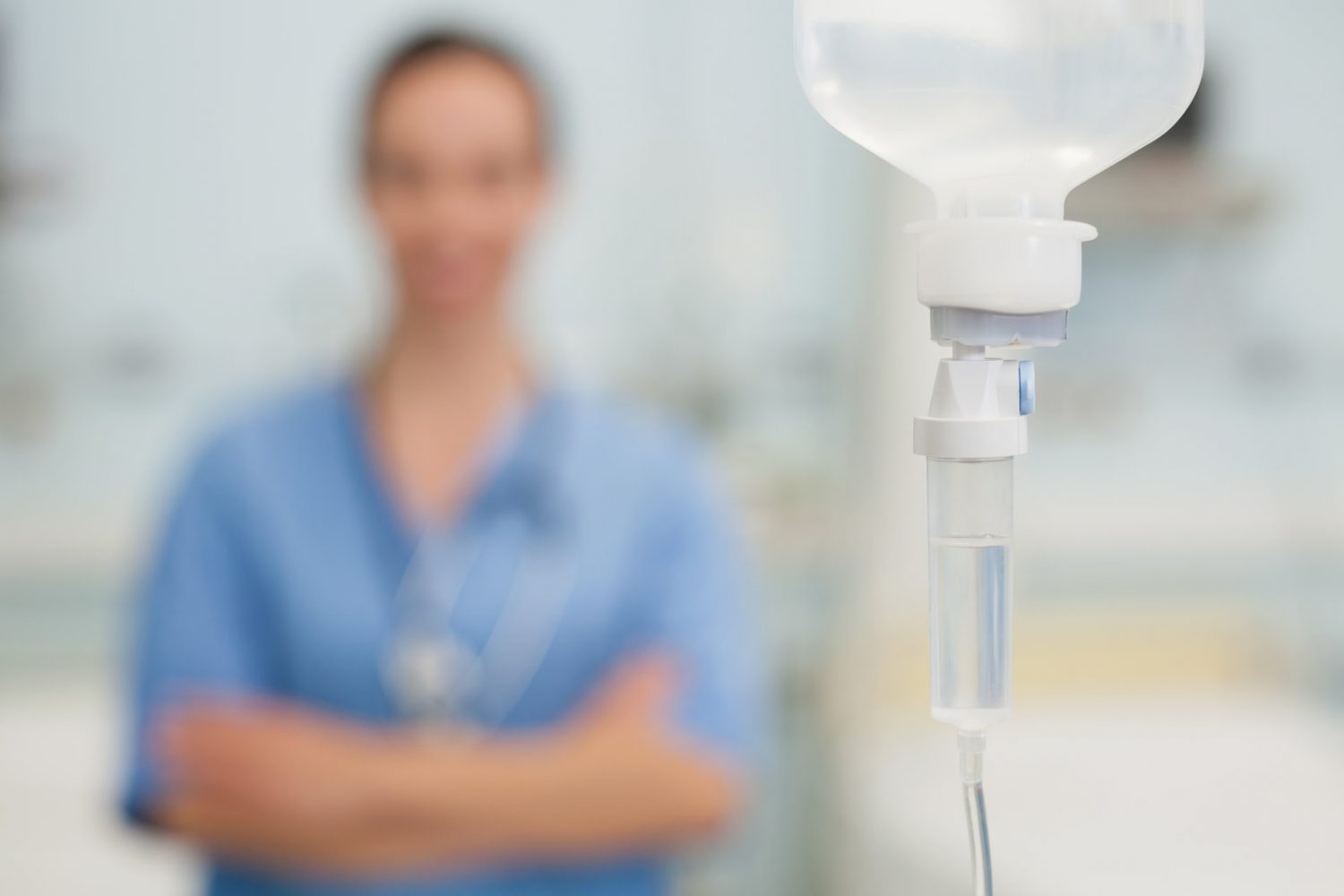 A central line IV is also known as a central venous catheter (CVC) or central venous access device (CVAD). It is a type of catheter that is placed in a large vein to allow for the delivery of multiple medications at once or easily draw blood for testing.

Unlike a standard IV, which can only be used for a maximum of a few consecutive days, a CVC can be safely used for an extended period of time to allow for lengthy treatments without causing excessive pain or damage to the blood vessels from frequent IV use.

A central line also offers a way to deliver large volumes of fluids at a greater speed than would be possible with a regular IV. Central lines offer a range of benefits, but also come with some inherent potential risks.

When Is a Central Line Used?

There are various factors in determining whether a central line should be used, which include the patient’s treatment plan and preference, as well as the doctor’s preferences and recommendations. Lengthy treatments that require frequent use of an IV, can cause scarring and damage to the patient’s smaller veins that are accessed through the hand or arm.

A CVC offers the advantage of being able to stay in for an extended period of time, which can make long-term treatment a lot easier and more bearable for the patient.

The CVC is a larger and longer catheter that is placed in a large vein in the chest, upper arm, or groin area. Some types of CVCs can stay in for weeks, months, or even years.

A doctor may use a central line to deliver long-term pain medication, treat an infection that requires a lengthy course of medicine, and other conditions such as cancer or heart issues. CVCs can also be used to take samples and to deliver fluids, nutrients, and blood.

A CVC is advantageous in patients undergoing:

It is important that patients speak to their doctors before agreeing to get a CVC and get recommendations on what type of device should be used and why. In cancer patients, the assigned care team should help determine if a patient could benefit from a CVC and suggest the appropriate type.

There are different types of CVC devices, which are administered through various places on the body and offer unique advantages. The two most common types are ports and PICC.

A port is sometimes referred to as an implantable venous access port. It is made of a small metal or plastic drum and a thin tube, which gets inserted into a large vein either in the chest or the arm during surgery.

The drum comes equipped with a silicone septum, a kind of self-sealing membrane, and special needles, typically called Huber Needles, are used to access it through the skin. There are both single and double ports available.

The benefit of a port is that it can stay in place for many years. It also requires no special care when the needle is removed. Once the place of insertion is healed, the patient can go on to shower, bathe, or even swim without the need of a cover or protection. This option should always be discussed with the patient’s care team or doctors.

A PICC line, which stands for peripherally inserted central catheter, is placed into a patient’s arm and runs to the large vein near the heart. Medicine or fluids are then administered via one or two tubes called lumens that protrude from just above the elbow.

A PICC line may stay inserted for weeks or months; however, it is important that the insertion site stays protected from getting wet while bathing or showering.

Most commonly, the veins used for the placement of CVCs are the internal jugular vein in the neck, a vein near the clavicle called the subclavian, and the femoral vein in the groin area. During the procedure, the patient typically remains covered from head to toe using a sterile drape to prevent infection. A hole in the sterile drape is used to access the line and place the catheter in the vein.

An ultrasound is used to locate the appropriate vein, and then the catheter is stitched in place or held in place by an adhesive. The area is then cleaned again with antiseptic and covered with sterile material, leaving the lumens accessible.

It is necessary to confirm the correct placement of the CVC using an x-ray before the central line can be used. In certain cases, the doctor might need to adjust the placement of the catheter to make sure it is in the right positive relative to the blood vessel.

A PICC line is inserted through a needle into a vein in the arm, and the catheter is then threaded through the needle and into a large vein in the chest near the heart. The needle is then removed. Surgery isn’t necessary to insert a PICC line.

A bloodstream infection is the greatest risk associated with a central line. To prevent infections from developing, there is a standardized set of best practices, including use of a full-body sterile drape during the insertion of the line, ensuring sterile dressing changes, and removing the line as soon as it is no longer necessary.

CVCs should only be used in instances when they are truly necessary and warranted. Most doctors prefer placing the CVC above the waist whenever possible as the femoral vein sites are associated with an increased risk of infection.

Other risks from CVCs include pneumothorax, otherwise known as collapsed lung, which is more common when the central line is placed in the subclavian vein. The patient’s heart may also become irritated during the process of inserting the line through a blood vessel near the organ and can cause changes in the heart’s natural rhythm.

This can typically be managed through the appropriate placement of a catheter but could potentially require medication in some patients. A final and rare complication from central lines is an air embolism. This is a condition during which air makes its way into the vascular system and can be extremely serious, but also preventable.

As you can see, CVCs can offer significant benefits when it comes to ease and comfort of administering long-term IV treatments used for a variety of ailments. Yet, it is important for the patient and the medical team to seriously consider whether a central line is necessary for each case.

Before making this choice, it is advised that the patients ask about possible options and determine if a CVC is covered under their health insurance plan. Like with many medical treatments, a CVC comes with inherent risks, so it is up to the individual and their medical team to determine if the benefits of a central line may outweigh these potential risks.